PORTSMOUTH – With a nod towards next school year and the new social and academic pressures that come with making the leap into middle school, the school district held an informational workshop about substance abuse for parents of fifth graders at Portsmouth Middle School on Thursday night.

The workshop was led by the global nonprofit, Freedom from Chemical Dependency Prevention Works, or FCD, and aimed to educate parents on the role they play in drug prevention, the mental and physical effects of drug use on children and the common misnomers circulating regarding adolescent drug use and addiction. Drug Free Kids NH, the Little Harbour Charitable Foundation, the Portsmouth School District, the Portsmouth Safety Association, Portsmouth Police Department, the Rye School District and FishNet Media sponsored the presentation.

“One thing I see, when parents come to these kind of meetings, the children pay attention, they notice,” said FCD Prevention Works prevention specialist Drew Bowie. “This is the first step in becoming a successful piece of the prevention process in children.”

The organization has worked in substance abuse prevention and helped more than 2 million students in over 60 countries. Bowie said all prevention specialists are in long-term healthy recovery from a drug or alcohol addiction.

Bowie said the group approaches substance prevention from a conversational approach and they do not take a stance whether substances are good or bad but strive to educate students about the health risks associated with drug use.

“The one main anchor of when we speak with students on these topics is how it effects the teenage brain as compared to an adult’s,” said Bowie. “One of the best ways I explain it to students is that from ages 14 to 18, the last part of our brain is developing, which is the frontal lobe and that is responsible for decision making.”

Bowie said if teens are starting good habits like studying, doing their homework, exercising, learning a foreign language or learning to play an instrument; it is much easier to continue those habits into adulthood. He said that substance abuse in this age range would stunt development of these good habits.

According to Bowie, prevention is a collaborative process. He said the biggest roles of parents are to applaud individuality in order to make their children feel better about the choices they make. He also suggested translating media messages that their children are inundated with and ground the messages they observe in reality.

“I want my daughter to be as successful as possible so anything I can do to give her better tools to navigate adolescence, which is so difficult,” said Portsmouth resident Ruthie Spiero, who has a daughter in the fifth grade at the New Franklin School. “I’ll be excited to have a discussion about what he (Bowie) said to me and what he said to her and we’ll be able to have a discussion and she can ask questions in case there was anything she didn’t want to ask in front of her classmates.”

Assistant Superintendent of Portsmouth Schools George Shea was also in attendance and said he is proud of the messaging regarding substance abuse that the school system has been giving both students and parents.

“Nights like this help us relay a consistent message to our students from educators and parents,” said Shea. “Kids sometimes look for chinks in the armor of our message; they’re possibly looking for a different voice to endorse a particular behavior. So being as poignant and unified as possible with that message is so important.” 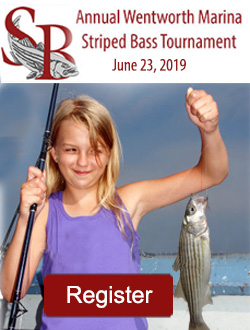 Learn more about how you can become a sponsor for the Annual Striped Bass Tournament. Download the brochure or choose to donate online.

LHCF in the News